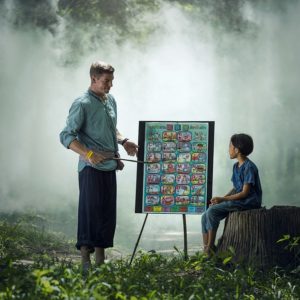 Once there was an advisory class of Mr. Roberts in a primary school in Michigan. Since he believes that every child should develop creativity within them. He let his students do what they want during his class. He would read newspapers every day in front of his students. On the other hand, his bunch of adorable boys and girls would prefer to talk, roam around and do nothing.

One day, the principal of this primary school walk around the corridor of the school premises. He observed that Mr. Roberts is doing nothing in his class. He has seen him reading a pile of newspapers and magazines. He was surprised by Mr. Robert’s actions in his class.

He called Mr. Roberts and asked on why he is not teaching his advisory class. Mr. Roberts answered with confidence that he let his students learn from themselves through self-creativity. Upon his answer, the principal warned Mr. Roberts to do something on his class for two weeks. He will also be vigilant on his everyday class.

Being warned and wary about the principal’s warning, he told his class to do something creative. One of his students, named Rocky, being techie and creative. He showed the use of Whiteboard videos to his classmates and Mr. Roberts.

They were all amazed on how they were able to understand nouns and pronouns in a short, simple but sweet illustration. Mr. Roberts, on the other hand, asked Rocky to teach him about using Whiteboard videos. Moving forward he used this tool to persuade and encourage his students to learn World history. It was easy to recognize the timeline since it looks like an illustrated storytelling video. The principal, faculty, and parents are happy with the results.

Reading the short story of Mr. Robert, Rocky, and Whiteboard videos, it emphasizes easier learning and transfer of information. Whiteboard videos are the best tools to inform, educate and entertain its audience. Most of the people who will watch and learn the benefits of whiteboard videos would feel 100% satisfied with how it tells a story with pictures.

The sender of the message would really feel great because of the amazing technology of communication through whiteboard videos. It simply implies best. Focusing on pictures, colors, lines, curves, and circles of the illustration will give you a twist of less is more?

A message is inspired through audio-visual technique. Audio complies through the use of sounds through words that are understandable by the larger target audience. You also don’t need to get confused since whiteboard videos are packaged with illustrated drawings. Aside from its art package, it also employs efficiency because the old saying, a picture paints a thousand words. How would you love to listen to the song too? It’s an old song but it is winnable. Your target audience or the receiver will surely say, Oh yeah! I get it!

We use cookies to ensure that we give you the best experience on our website. If you continue to use this site we will assume that you are happy with it.OKPrivacy policy